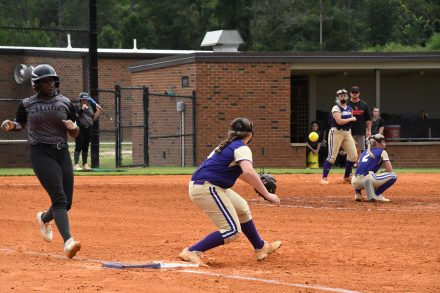 Destiny Woodard throws Kylie Miller the ball at first base to tag out a Syrupmakers.

The Lady Cats Softball team took on their toughest competition yet, when they faced off against region competitors, the Cairo Syrupmakers last week.

The Lady Cats first traveled to Cairo on Tuesday, where they cruised to an easy 11-2 victory after an emotional opening.

The Syrupmakers honored the family of the late Dr. Roy Mathews by donating to his memorial scholarship prior to the start.

Wanting a win for Mathews, the team opened up scoring in the first inning, when Kailyn Wilson hit into a fielder’s choice, scoring one run.

Kylie Miller then stepped up to the plate and fouled, where Brenna Conley and Delaney Purvis were able to score on a passed ball.

With a 3-0 lead, the Makers responded with a run of their own in the bottom of the first inning.

The Lady Cats went on to score an additional four runs in the top of the second inning.

Destiny Woodard started things off at the plate and was walked, before Haylee Nix singled, scoring Woodard.

Conley then bunted and was able to reach on an error by Cairo, scoring Nix and herself.

Halle Cannon closed out the second inning with a homerun, giving the Lady Cats a 7-1 lead.

The Lady Cats held off the Makers and shot down any chance of a comeback in the fifth inning, when they scored four more runs.

The offense was led by Kristin Bennett, Cannon and Wilson, who each had RBIs in the inning.

The Lady Cats tallied nine hits throughout the game. Nix, Wilson and Bennett each racked up two hits, while Cairo’s number 12 had the most hits for the Makers, going two for-three at the plate.

Conley was attributed with the Lady Cats’ win. She allowed six hits and two runs over five innings, striking out four and walking zero.

Head Coach Christopher Bryant was proud of the win.

“It was our first big test,” he said. “I think the girls were nervous but excited. We came out of the gate hungry and just continued to have runs.”

The Lady Cats faced off against Cairo again at home on Thursday afternoon, where the team proved to be much tougher competition since the day prior.

“Cairo came here with a chip on their shoulder,” Bryant said. “They knew they had something to prove.”

Despite a lightening delay and slow lead, the Lady Cats still pulled out a 5-1 win.

Both teams opened up the first two innings with a strong defense and offense. It wasn’t until the top of the third that Cairo scored a run.

With the Lady Cats down one run, they made a comeback in the fourth inning.

Wilson was first at the plate, where she walked. Miller then doubled, scoring Wilson and tying up the game.

Lenijah Henry then shook up things at the plate, singling on a bunt.

Woodard was up to bat, and was hit by the pitch.

Bennett followed up Woodard at the batter’s box. She lined out to center field, but allowed Miller to score on her passed ball, along with Woodard.

The Lady Cats now led 3-1 and pulled away for good in the bottom of the fifth.

The Lady Cats will now travel to TCC on Thursday for a region doubleheader beginning at 4 p.m.