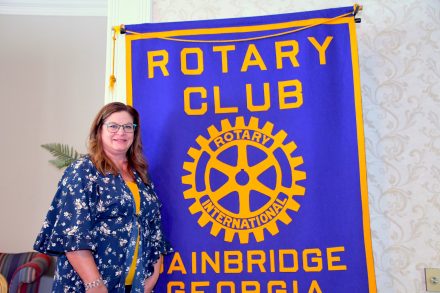 Lisa Knapp, executive director of Lawson Neel MedBank spoke on how they help customers afford their medication on Tuesday.

The Bainbridge Rotary Club met Tuesday afternoon for their weekly meeting. The speaker of the day was Lisa Knapp, executive director of Lawson Neel MedBank, who explained the non-profit organization’s origins and purpose.

“In 2001, in Thomasville, Georgia, there was a man who was observed at a local pharmacy,” Knapp explained. “He had two medications. He was trying to decide which one of those to purchase, because he couldn’t afford both of them.” The bystander who observed this man’s problem told his Sunday School class about the situation, and they initially came up with the idea to simply purchase medication for those in need. Upon realizing how financially unfeasible this goal was, the group followed the example of a Savannah medbank to develop the Lawson Neel MedBank in 2002.

The medbank doesn’t only serve Thomasville, they also serve surrounding counties, including Colquitt, Grady, Decatur, and even parts of north Florida. Rather than paying for people’s medication outright, the Lawson Neel helps patients apply to patient assistance programs or find the least expensive alternative, should an assistance program not be available.

“How the process starts is, the healthcare provider sends a referral to us with the medicines their patient needs help with,” Knapp said. “We contact the patient, get all the information we need from them to be able to do this work, such as proof of income, if they have insurance or don’t, that kind of thing, and start from there.”

Knapp reiterated that the Lawson Neel are only facilitators who do paperwork. “We don’t have medicines in our office, that’s a big misconception.”