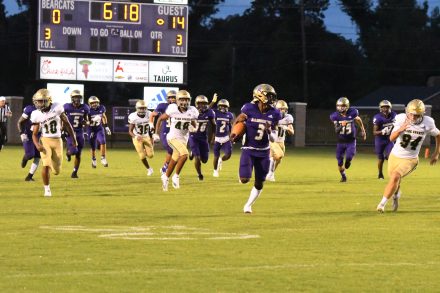 Deyon “Smoke” Bouie breaks free and runs all the way down the field for a touchdown.

Prior to kickoff, the stadium honored the family of the late principal Dr. Roy Mathews, who the Bearcats have dedicated their season to. While the Bearcats gave it their all to get a win for Mathews, they eventually fell short to the Gators 42-15.

The Gators started off strong, scoring with 9:40 left in the first quarter.

Following a 6-play, 71-yard drive, Cartevious Norton made a 3-yard run for a touchdown. Gator Henry Bates then made the kick and it was good.

Minutes later with 6:24 left to go in the first quarter, the Gators had a drive of 4 plays over 50 yards with Jarvis Hayes receiving a 36-yard pass from Thomas Castellanos for a touchdown.

Bates made the kick again and it was good, giving the Gators a 14-0 lead.

The Gators then kicked off to the Bearcats, where Deyon “Smoke” Bouie ran a 95-yard kick return for the Bearcats’ first touchdown of the night.

The snap was bad with no attempt made for an extra point, leaving the Bearcats trailing 6-14.

The Gators ended the first quarter with one more touchdown.

They had a drive of two plays over 71 yards, with Hayes receiving a 33-yard pass from Castellanos. Bates made the kick and it was good.

Going into the second quarter, the Gators led 21-6.

However, the Bearcats found the end zone again with 11:56 left in the second quarter after Quarterback Bo Smith made a 1-yard run, following an 8-play, 80-yard drive.

Blake Fagan then made the kick and it was good, giving the Bearcats a chance for redemption.

Following the Bearcats’ touchdown, the Gators responded with two of their own.

Dae’Jeaun Dennis caught a 16-yard pass from Castellanos after a 2-play, 71-yard drive and ran it for a touchdown. Bates made the kick and it was good.

With 12 seconds left in the half, the Gators ran the ball for 60-yards over eight plays. Castellanos then made a 1-yard run, scoring. Bates made the kick and it was good.

The Bearcats now trailed 35-13 headed into the half.

Both teams came out strong in the second half.

Neither team scored a touchdown in the third quarter. However, Bainbridge got a safety after they recovered a fumble by Ware County’s offense in the endzone.

The final touchdown of the night was made by Hayes in the fourth quarter when he received a 19-yard pass from Castellanos and ran it for a touchdown, with Bates making the kick.

Head Coach Jeff Littleton was proud of the team’s second half efforts.

Littleton plans to take the off week to “practice better, coach better and play better.”

“We will be better I promise that,” he emphasized.

Littleton attributed the loss to some mistakes such as fumbles and missed passes, but said they are still early season mistakes.

The Bearcats will have the week off before traveling to Cairo for their first region game of the season.