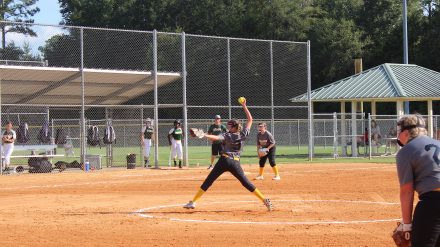 Chloe McCook struck out nine during the game against Whigham MS and allowed zero runs.

Seventh grader Chloe McCook served as the Stallion’s pitcher; she allowed zero earned runs and struck out nine over six innings. At bat, McCook had a single and a double, and also scored two runs, going 4-4.

For her part, eighth grader Callie Eakin scored two runs, had a single, and knocked in one run.

Eighth grader Payton Staples scored one run and had two runs batted in.

For the rest of the game, seventh grader Destiny Fillingame scored two runs; sixth grader Emsleigh Glass and eighth grader Jacee Brock both scored a single run each; and sixth grader Lana Smith stole a base in the third inning.

“Last year was our first year,” Coach Anna Barber told the Post-Searchlight in an interview.

“Because of COVID, we only had two weeks to practice. None of the girls had any experience playing softball. Now, they’ve had a year.” Barber continued, praising the girl’s efforts, “Overall, they showed great team effort yesterday (Thursday). They kept their effort up during all innings.” According to Barber, the team showed more restraint as well: “The difference between this game and the last was they were a lot more patient at the plate, not swinging at all the balls.”

The Stallions will depart for an away game against Miller County Middle School on Tuesday at 4:30. “I hope they keep up that positive spirit,” Barber said.