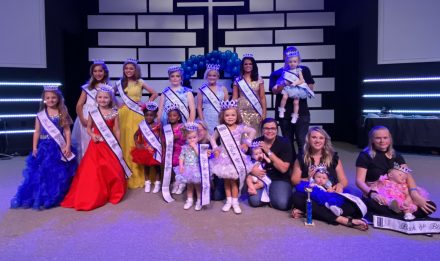 Inaugural Miss Back the Blue Pageant a success

Saturday, September 11, Photographer Casey Alday hosted the inaugural Miss Back the Blue Pageant, which featured nearly 50 contestants from around the state and competitors from Florida, to raise money for the Captain Justin Bedwell Scholarship fund.

Alday said she is a director for pageants in Florida and the idea for a frontline hero- themed pageant came to after the passing of Bedwell.

“Me and Justin were good friends,” she said. “I just wanted to do something that would honor him.”

Alday was shocked when she put out the fliers and 48 girls registered.

“Usually there’s about 20-25 girls who participate in this area, but I had girls messaging me the night before asking to participate, who I had to turn away,” she said.

The outfit of choice allowed all competitors to dress as their favorite first responder, which might include nurses, doctors, firefighters, police offers and EMS paramedics.

The pageant also had entertainment provided during intermission.

Chris Jackson, Charles King and Adam Mobley of the Decatur County Sheriff’s Office, along with Colby Swicord of BPS and Decatur County Fire and Rescue took the stage in a reverse Beauty Pageant to see who would collect the most money for the scholarship.

Swicord, who went by Sugga Boo, was victorious in the contest, collecting $86.

The winners for each age category were then crowned.

In the infant category, Lilly Grace Cox was named Hospitality Supreme, while Jaicee Hemanes was named Infant Miss Back the Blue.

Baby Miss Back the Blue was Everleigh Kennedy, while Emsley Jenkins won the People’s Choice Supreme in the Baby Category.

Toddler Miss Back the Blue was Delilah Brown, with Khilynn Worthy taking home the third highest honor of the evening, Grand Supreme, along with the ages 0-6 Photogenic Supreme.

For the Miss Category, Amber Roland took home the title, while Mollie Meredith won the ages 6 and up Photogenic Supreme.

All the money raised from the pageant will go toward the Scholarship, which will be given to a senior of a first responder family.

Alday said the applications for the scholarship will be forthcoming and include all surrounding counties.

Alday is thankful to the sponsors who made the pageant possible and said she cannot wait to make this pageant an annual event for all to participate in.