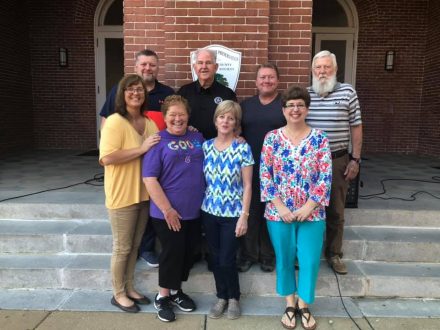 On Wednesday morning, July 14, at 7:14 a.m. Decatur County ministers and citizens came together in front of the Decatur County Courthouse and joined the other 158 counties in the state to read the Bible- from Genesis to Revelations.

This is the third year Decatur County has participated, beginning in 2019 with only two readers. This year seven individuals read assigned chapters of the Bible, beginning at Ezekiel 12-19.

Sometimes referred to as Bible Reading Marathons, or the 7/14 project, this all began with Jerri Tuck receiving a Facebook friend request from a Laura Williams of Nigeria. In 2018 she requested information on how to start a Bible Reading Marathon. As communication continued between the two, it led to a contact from a Dianne Bentley of Des Moines, Iowa, the Iowa state leader for the Bible Reading Marathons, a project she had begun in 2018. Tuck took on the project and it has spread nationwide.

Cecilia Willis has been one of the instrumental leaders in bringing the Bible reading project to Decatur County.

Willis said she first heard about Bible readings at Courthouses through the media and wanted to be involved. At the time, Carnes had also heard about Bible readings and was planning one of his own. Through word of mouth, Willis and Carnes connected and joined forces. They then reached out to Tuck, who explained her mission. Since then, Carnes and Willis have been dedicated to the cause.

“It’s pretty cool to think that all 159 counties were reading the Bible at the same time, and when we got through, we had read the entire Bible,” Willis said.

Willis said this year’s turnout was a bit smaller, but she knew some would not be able to attend. However, this year she went live on her Facebook feed, so everyone who needed to receive the message could hear it at the hour or choose to watch it later on.

“You don’t have to be there to be a part of this,” she said.

This year’s Bible reading was also special to Willis because Brock signed all of the verses.

Brock was diagnosed with cancer approximately a year ago, but the day prior to the reading she got the all clear from the doctors.

“She’s a walking, talking miracle,” Willis said. “Hearing that, only made this day that much more special.”

Willis hopes this reading shows the more human side of individuals and opens the eyes of those who may not get to regularly hear the Word.

“This was an opportunity for me to hear the Bible all the way through,” she said. “It’s a neat way to draw in everyone from the community and know the state of Georgia read the whole Bible.”

Willis hopes this reading was a mid-week pick me up to those who may need some love or encouragement.