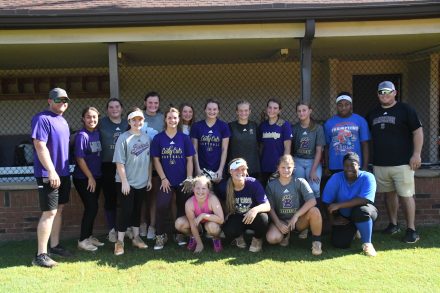 The Lady Cats Softball team has a lot of new faces this year, but according to head coach Christopher Bryant, the team is scrappy and their experience won’t stop them from bringing home a win.

There are four seniors on this year’s team with Halle Cannon, Wenda Sheffield and Kailyn Wilson returning, while Delaney Purvis will be entering the varsity games for the first time.

Bryant said these seniors are great leaders and have really set the tone for the season.

“These girls lead well and lead by example,” he said. “They are great role models for our younger players.”

Cannon acknowledged that as a senior, she has big shoes to fill from last year.

“I think we’ve done a great job so far, we’ve put in a lot of hard work, but we will have to come together to have success,” she said.

Sheffield agreed, saying she’s most excited to see her new teammates come together as a family, because that is what will bring home a state title.

“How they’re coming together will be the difference in some of the tight ball games we play,” Bryant echoed.

In order to do this, Cannon, Sheffield, Wilson and Purvis have tried to make the younger players feel comfortable, especially when it comes to asking questions or specific game situations.

Their communication paid off over the summer, when the team competed in a tournament against two AAAAAAA schools.

The team first split a game with Lowndes, before losing to Colquitt County, but Bryant thought it was a great opportunity for the team to use their communication skills and just see the competition.

Regionally, Bryant and the senior believe Cairo and TCC will be some of the toughest competition they face.

This year, Bryant has the schedule created in rival weeks that will resemble playoffs.

For example, the team will play TCC three times in one week and it will be the best two-out-of three series.

“We are both younger teams, so it will really be a battle of who wants it more,” Cannon said.

Purvis said TCC also has a younger pitcher, as do the Lady Cats this year.

Sophomore Brenna Conley is set to take the mound for the Lady Cats, while Cannon will return as catcher.

Other positions wont’ be officially announced until game week.

The first game of the year will be against Berrien on August 5.

Cannon is especially looking forward to this game, because they didn’t get the chance to compete against them last year.

While it looks to be a challenge, it is something everyone is looking forward to.

An official schedule will be released in the coming weeks, as the Lady Cats hope to see a lot of fanfare this season.