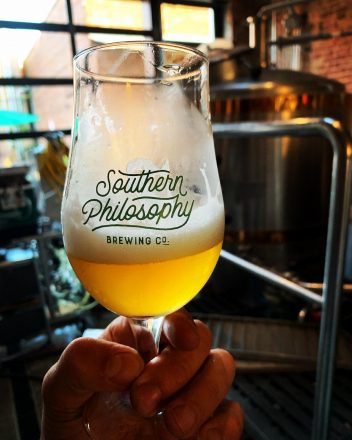 A member of the Tallahassee Beer Society joined Southern Philosophy for their second anniversary and snapped pictures of every course and beer.

The dinner pairing began with a newly brewed Saison Flint, along with Cream of Crab Soup, using only local Gulf Coast Blue Crabmeat and finished off with dry, sherry and Spanish Smoked Paprika. This dish also came along with buttermilk, sweet pepper and scallion biscuits.

“The Saison Flint is a traditional French style,” owner Gallagher Dempsey said. “It’s a really dry beer with a lot of flavor that’s light in color and has a nuance of champagne.”

The second course featured a previous sellout, the Attapulgus Amber, which is a German Marzen Lager.

The Amber was paired with a rabbit con fit wood-fired pizza. The pizza was made from a ricotta-based sourdough crust with slow-cooked rabbit confit, green tomato chutney, sautéed leeks and carrot-ginger-turmeric glaze to top it off.

“We got the rabbit from Jones Meat Company and slow cooked it in the oven French Style, before buttering the fat and pulling the meat off to make the pizza,” Dempsey said.

Dempsey admitted some people were unsure about the rabbit, because it was something different.

However, Dempsey said if he’s going to do a meal pairing, he wanted it to create something unique to go on the pizza.

The third course featured a fan favorite with a twist.

“It was the first time we’ve done that, but people really enjoyed it,” Dempsey said.

The beer was paired with fresh local watermelon, cantaloupe, cucumbers, mint and a mix of microgreens, arugula and romaine. It was all topped off with a honey-lemon basil dressing.

The fourth course brought about another new brew, known as fuzz juice.

It was paired with Diver sea scallops seared and wood fired and topped with Georgia-peach beurre blanch. The dish came with a melody of okra, peppers and honey-roasted tomato sauce over a custom blend of Bumpy Road Farms cold smoked grits and polenta.

The final brew of the evening was a cocolocomoca, which is a toasted coconut-cocoa-vanilla imperial stout. It was paired with Dempsey’s grandmother’s fresh-picked blackberry pie, which a recipe dating back over half a century.

Dempsey was happy with the turnout and the response to the dishes.

“Everyone responded really well,” he said. “We worked on this for about three weeks and my mom came in to help out with the ideas and everything.”

Friday night Midnight Matinee performed in the outdoor space, while on Saturday Gavin Powell played indoors with Holly on the fiddle.

“It’s been fun to engage with the community and see people from out of town who stop in to try our brews,” Dempsey said.

With the second anniversary now completed, he invites everyone to come out and try these new beers, as he said they will be on tap until they run out.

“We have more on tap than we’ve ever had and a bigger variety,” he added. “We have 13 beers total.”

As for year three, Dempsey is working on barrel-aged beers. One of the current projects is a barrel-aged imperial stout. He said it could be up to a year before it’s completely ready, but he is excited for a new project.