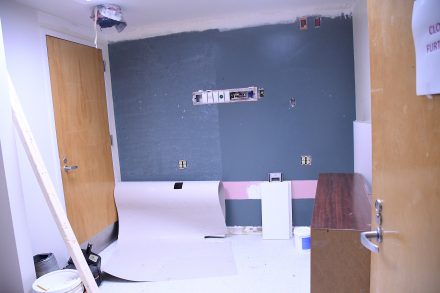 Construction continues in the Emergency Room on a ligature-resistant room.

Memorial Hospital and Manor is currently in the process of renovations, with some projects winding down, others still ongoing, and new projects set to begin soon. Renovations on the manor are winding down, while a ligature-resistant room is being set up in the Emergency Department, and major renovations to the Kirbo Women’s Center are set to begin at a yet-to-be-set date.

At the manor, various cosmetic changes were made, including the furniture in the dining room and lobby being replaced, with the glass enclosure around the nurse station set to be removed to allow the residents easier access to and communication with staff. Lee Harris, assistant administrator at the hospital, sat down with the Post Searchlight to discuss the projects, including some of the more expensive renovations. “The doors down there, we just had regular storefronts that you would open up, like you would see for decades, … but during COVID, during the project, we were able to put automatic doors in.” He continued, “A lot of the residents, they have something called WanderGuard. They put it on some residents that wander… so they would have a bracelet, and when they get near a door it locks the door down. So we were able to update that system and protect our residents down there.” The manor project was funded by the Georgia HEART Initiative.

As for the ED, one of the rooms is currently being converted into a ligature-proof room for patients with behavioral health issues, designed to have no corners, edges or features capable of allowing a person to tie something and potentially commit suicide. “We’re getting a bed without any corners, the door handles have changed, the lights have changed, there’ll be a camera in there so we can make sure nobody hurts themselves.” Other features include a new door with an observation window, and a new type of sprinkler designed to be flush with the ceiling. These renovations are being partially funded by the Behavioral Health Patients Grant, a part of the Georgia Department of Community Health.

Lastly, the Kirbo Women’s Center is expected to begin extensive renovations in the coming weeks. Funded by the Kirbo Family Foundation, these include tearing up the carpet and replacing it with luxury vinyl tile, tearing off wallpaper and painting the walls, and fully refurbishing and converting one of the birthing rooms to serve as a showroom. “We thought we’d do one room, new wall covering, new furniture, new bed… to show people what a new room would look like. It’s something to show other donors if they want to contribute,” Harris explained. Again, exact dates for these renovations have yet to be set.