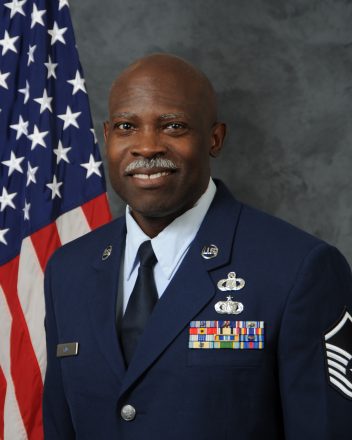 Master Sergeant Kelvin L. King has had a long career in the military as a reservist in the Air Force. The Georgia native is from a family of fighters. Of his 16 siblings 6 have served and 2 are currently serving in the Navy. King’s military service began 24th of June 1987 and ended with retirement on 19th of March 2021, nearly 34 years. The military has been a very important part of King’s life. Beginning as a Security Specialist for 25 years which was later transitioned to Security Forces which combined 2 separated entities, Security and Law enforcement into one. Then King did a career change call cross training which led him to Religious Affairs. This job was a big change from what King was accustomed to doing.

King always wanted to join the military from being a youngster and being a Military Policeman was a job he enjoyed and thought he would retire in that career field but God had other plans.

“My job was always helping military members and their dependents but as a Religious Affairs Superintendent I was able to help in a different way. “

The last assignment King was blessed to be a part of was a bata test program called Task Force True North, presently True North. King was serving overseas in Kuwait when he heard about the new Air Force program that was implemented by the Joint Chief of Staff of the Air Force then General Goldfien. The program was developed due to high suicide rates in the Air Force. One suicide is one too many. The program was also developed to reduce the stigma from military members and their families receiving mental health services.

King’s career ended at Beale Air Force Base in California, where he served his final three years as a fulltime IMA (Individual Mobilization Augmentee), which is a reservist who works as a backfill to active duty personnel.

King had the great pleasure of serving with Chaplain Jeremy D. Caskey and was assigned to the 9th Maintenance Group at Beale Air Force Base in California. The True North Team consisted of a program manager, RST (Religious Support Team) Mental Health Providers, Mental health Technicians.

King was employed by BASF of Attapulgus Georgia where he retired after 35 years or service. BASF was a great supporter of King in his military service.

King was born and raised in Bainbridge Georgia and now lives in Cairo Georgia. He is married to the former Ms. Mildred Hayes also from Bainbridge. They have 4 sons, Billy, Adrain, Antonio, and Terrell.

King and his wife have an Assistant Living Facility (Emily’s Personal Care) in Cairo Georgia they have run for 20 years. They have 5 residents in their care. Glenda, Luther, Harry, Ivan, and David.

King is the Son of Mr. James Curtis King of Bainbridge and the late Nancy L. King.