All Gave Some, Some Gave All: A Tribute to… 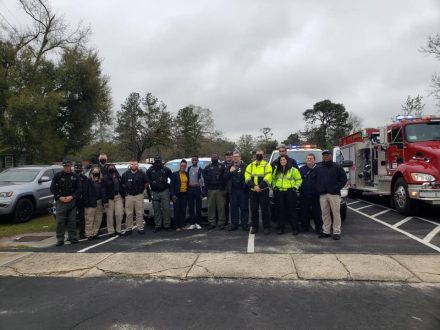 Officers greet Marquail Jones and thank him for his respect shown to Capt. Bedwell.

Jones was recognized for a picture that went viral of him during Tuesday’s processional for Captain Justin Bedwell.

Jones could be seen in the picture saluting the fallen officer for the entire processional, while other students were talking among their friends.

Officer Chris Avery was among one of the many law enforcement employees who it particularly stood out to.
“I saw the picture and it stood out to me,” he said. “It took courage for him to salute the entire time with all his classmates around and it didn’t go unnoticed.”

Avery then reached out to fellow officers and discussed going to Jones’ school to recognize him and all were in agreement.

They arrived at the school, where Jones was escorted across the street by School Resource Officer Leroy Akins.

There, Jones was thanked by Lt. Pat Trolinger for his actions. Trolinger told Jones that on behalf of the Sheriff’s Office they appreciated his respect and would like to salute him. All officers, along with Jones then saluted each other.

Avery addressed Jones and told him to continue to stick out from the crowd, because it does not go unnoticed.

After speaking with officers, Jones was able to check out all the different patrol vehicle and fire engines and ask questions he had about law enforcement, as he told them he was interested in pursuing a career in the Military or Law Enforcement.

The officers of Decatur County were not the only ones impressed with Jones’ incredible character.

Money penned a letter to Jones, continuing to encourage him to be patriotic and thanking him for his support.

“Courteous acts such as yours reminds law enforcement that we are still appreciated and we find that tremendously gratifying,” Money wrote.

Money sent Jones the letter and Commendation, along with a cloth badge and pin for Jones to keep.

Kimberly Cooper of Whigham, Georgia is also organizing a fundraiser on GoFundMe for Jones. The fundraiser is collecting money to help Jones eventually follow his dreams of going to school for law enforcement.

The GoFundMe will close on March 12, where the funds raised will be given to Jones’ guardian, who has already set aside a savings account to put the money. Those interested can donate at https://www.gofundme.com/f/lets-help-marquail-become-a-police-officer