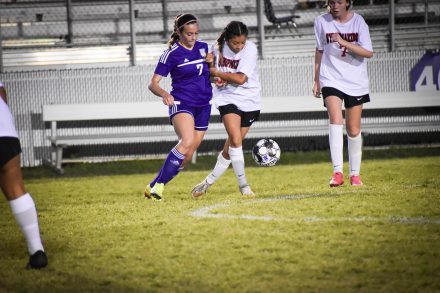 Junior Abi Surratt tries to take the ball from a Lady Syrupmaker during their game against Cairo.

Lady Bearcats Soccer surge forward with back to back victories

The Lady Bearcats Varsity Soccer team improved to 2-0 in region play by picking apart the Monroe High Lady Tornadoes 10-0 in Albany, while squeaking out a 1-0 nail biter with Cairo last Thursday at Centennial field in Bainbridge.

Last Tuesday Bainbridge built a 6-0 first half lead in route to a 10-0 mercy rule in the 58th minute of the contest.

Bainbridge Senior Forward Sarah Victor gave the Lady Cats a 1-0 lead in the 5th minute as she intercepted a Monroe pass and scored from 8 yards out.

Lady Cat Junior Midfielder Ann Kate Littleton scored in the 13th minute, on a 6 yard shot from the left side assisted by Senior Midfielder Emma Briggs to make the score 2-0.

Briggs scored the 4th Bainbridge goal on an assist by Junior Forward Nathaly Rodriguez, and was quickly followed 30 seconds later by a goal from Freshman Midfielder Brenna Conley. Conley was assisted by Senior Midfielder Jennifer Pascual.

Pascual had the sixth goal of the first half when she intercepted a Monroe Defender’s pass.

Bainbridge scored four more times in the second half in the span of five minutes for the 10-0 victory.

Junior Abi Surratt (53rd minute), Hill (54th), Rodriguez (55th), and Senior Defender Britney Lopez (58th) scored goals to finish out the scoring on the night. In the second half Conley picked up two assists while Hill provided the final in support.

GoalKeeper Keilaya Pryor was credited with the shutout.

On Thursday Bainbridge came away with their second region win, with a 1-0 victory over the Cairo Lady Syrupmankers at Centennial field.

Following a scoreless first half, in which Bainbridge created multiple chances, just missing out on goals.the Lady responded in the second half with a finish in the 57th minute.

Midfielder Ann Kate Littleton received the ball at midfield and sent a pass through two Cairo defenders pass to Forward Nathaly Rodriguez who struck the ball from 14 yards out for the lone goal of the match.

Bainbridge possessed the ball for 60 minutes of the match and outshot the Lady Syrupmakers 22-1 with 11 shots being on target. Pryor recorded her second shutout on the season.

Bainbridge is now 2-1 on the season.