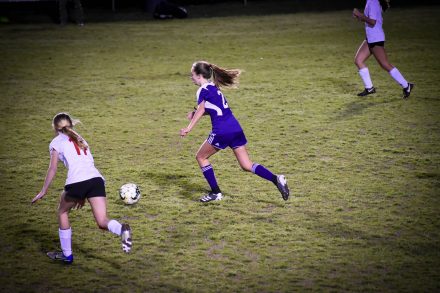 A Lady Bulldogs runs on the outside, while a Lady Cat tries to take it to the net.

The Bainbridge Junior Varsity Girls Soccer team kicked off their season by defeating the Lady Bulldogs of Thomasville High School 4-0 at Centennial field this past Tuesday.

Bainbridge took a quick 1-0 lead just three minutes into the contest as Bainbridge midfielder Addison Hill scored from the top of the six yard box. On the play Hill intercepted a Thomasville pass at the top of the Lady Bulldog penalty area, took two touches and crossed a scoring shot to the left post giving the Lady Cats a 1-0 halftime advantage.

After halftime Bainbridge sent in three goals in route to the first victory of the season.

Hill scored her second goal on the night, just three minutes into the second half, as she received a loose ball, dribbled around two defenders and then scored from twelve yards out to give the Lady Cats a 2-0 lead.

Bainbridge Forward Nathaly Rodriguez scored in the 47th minute.to give the Lady Cats a 3-0 lead. Bainbridge midfielder Elvira Hernandez sent Rodriguez a pass at midfield, in which she raced on a breakaway and scored from six yards out.