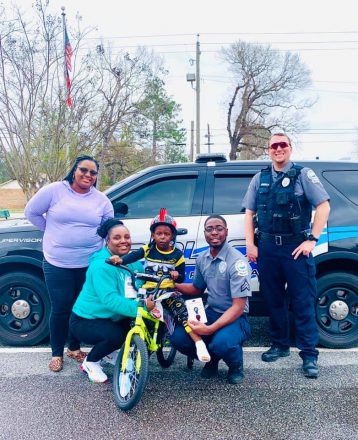 Wednesday, February 17, a child was struck by a vehicle while riding his bicycle on Broughton Street. The child, later identified as Nolan Donalson, has since recovered and recently received a new bicycle courtesy of Bainbridge Public Safety.

According to Georgia State Patrol Trooper Andrew Davidson, Donalson was riding his bicycle alone when he came out of a blind driveway and Regzine Powell, 25, hit him.

Davidson and other Bainbridge Public Safety officers aided the Donalson, while waiting for EMS, who then life-flighted him to Tallahassee.

Following the arrival of the life flight, Davidson called in the Specialized Collision Reconstruction Team (SCRT). Davidson said this team is called in when there are severe accidents that are prosecutable and they perform an additional investigation.

While on scene, Davidson spoke with the young victim’s mother who explained she and her son were on the way to Winn-Dixie and cutting through some back streets, when she came across a dog and had to go back, while her son continued to pedal to Winn Dixie. The mother said the dog finally ran away and she was on her way to get her son, when she heard he had been hit.

Davidson said the mother is currently under a separate investigation for several calls that made been made to Bainbridge Public Safety on the child’s behalf prior to the accident.

Davidson said he understands that children ride their bike on the road, and he did when he was a child, but realistically kids should not be riding their bike on a main roadway. That’s why there are sidewalks and cross walks.

“While there are laws that allow for bikes on the roadway, there are also laws that bikes have to follow the same rules and regulations as vehicles,” Davidson said. “This means they have to yield to the right of way and signal when they want to turn and stop at crosswalks.”

Unfortunately, Donalson was alone at the time and did not understand these rules and yield to Powell’s vehicle.

Powell has since been charged with DUI, driving with suspended or revoked driver’s license and serious injury by vehicle.

Since Donalson’s injury, several citizens that live on Broughton Street have brought up Powell’s rate of speed she was traveling and commenting that speed is often an issue. Davidson said Broughton Street is a city-maintained street and this is an issue the neighbors could come together on and petition the City for speed bumps.

In addition to that, Donalson is currently recovering and recently received a new bike from BPS that came with a helmet as a gift.