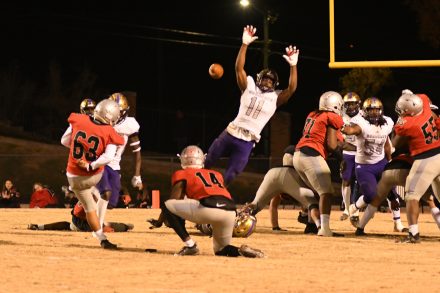 Tahari Tate (11) blocks the Bulldogs’ field goal attempt at the end of the first half.

Bearcats to host Semifinals for first time in school history

The Bearcats have punched their ticket to the AAAA Playoff Semifinals after a thrilling 21-10 win over the Cedartown Bulldogs on Friday night.

This was the eighth straight win for the Bearcats, going 5-0 in the region and now 3-0 in playoffs.

The night started on a positive note for the Bearcats, who won the toss and opted to defer.

The Bearcat defense came out strong in the first quarter, giving up only three points on a 21-yard field goal made by Bulldog Eri Velasquez with 6:55 left.

Going into the second quarter, the Bulldogs made a trick play and snuck a touchdown on the Bearcats. Dearie Sims received a 26-yard pass from Reece Tanner and ran it for a touchdown. Velasquez then made the kick and it was good, giving the Bulldogs a 10-0 lead.

“Defensively we had to weather the storm,” Head Coach Jeff Littleton said. “We can’t simulate the speed of that game as a scout offense.”

The Bearcats refused to stay down and made a touchdown of their own with only 0.45 left in the half.

Running back Rashad Broadnax received a 4-yard pass from Quarterback Quayde Hawkins and ran it to the end zone for a touchdown. Nicholas Tyre then made the kick and it was good, leaving the Bearcats down 7-10.

With only seconds left in the half, the Bulldogs took repossession of the ball and attempted a field goal, however it was blocked by Tahari Tate, allowing plenty of room for a Bearcat comeback in the second half.

Coming out of halftime, the Bearcats were on fire.

The defense held strong during both the third and fourth quarter, not allowing a single point, while the offense scored two additional touchdowns.

Broadnax made a two-yard run in the third quarter with 6:39 left, giving the Bearcats a lead. Tyre then made the kick and it was good, leaving the Bulldogs trailing 10-14.

For the final touchdown of the game, Wide receiver Braxton Johnson received a 3-yard pass from Hawkins and ran it for a touchdown. Tyre made the final kick and it was good, ending the game 21-10.

“We took over the second half because we were mentally and physically tough,” Littleton said, congratulating the team. “We’ve put in work this entire year and these kids have done everything we’ve asked them to do.”

Players were ecstatic, along with coaches that the Bearcats will now host the Semifinals on Friday night at Centennial Field.