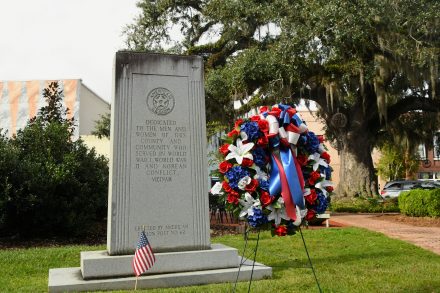 This past Wednesday, the Bainbridge community gathered in Willis Park to honor the men and women who have served their country for Veterans Day. The City of Bainbridge, the VFW and Bainbridge Public Safety all contributed to the ceremony, while the Bainbridge High School Band provided music, and the BHS JROTC presented the colors. Pastor John Erthein provided the benediction.

Dr. Donald Robinson spoke at the event, recounting his time in the Air Force.

“My time in the service was spent with my family primarily at an Air Force base loaded with nuclear weapons. All of us on that base knew that we lived in a target circle, sighted in by Russia for annihilation, should World War Three ever commence… Fortunately for us the Cold War remained cold.”

He spoke of transitioning from service to civilian life, “I must admit, I believe any veteran that comes to this podium would feel somewhat out of place. Being a former member of the armed forces, now in civilian life, it’s not about the spotlight… We rarely wear any signs of our service allegiance. Our term of service almost feels like it was another lifetime.”

He also took time to honor those veterans who gave their lives.

“We are honored that Veteran’s Day has been set aside to recognize us, but we know it pales in comparison to Memorial Day. That day recognizes our fellow veterans who made the ultimate sacrifice, for your freedom, and mine.”

Chief investigator Larry Funderburke also spoke at the event, honoring every veteran by name that has passed since last Veteran’s Day.

“As stated by Sgt. Major Bill Paxton, may we never forget our veterans. Freedom isn’t free.”

At the end of the ceremony, the City also announced plans to lay custom bricks in Willis Park in honor of veterans. These bricks can be purchased in honor of any veteran, not just veterans from Bainbridge.

Initially the plan was to unveil them at the ceremony, but delays caused by COVID prevented that. The bricks will now begin being laid in January, with a lunch and unveiling ceremony planned for the spring. 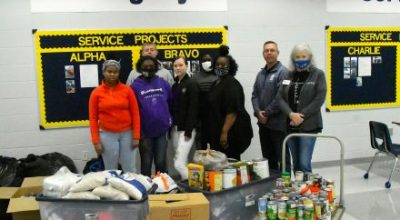