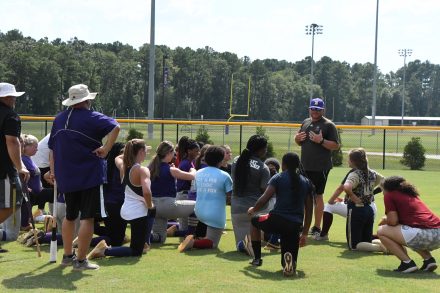 Coach Bryant gathered all the girls for a talk at practice on Tuesday and to go over game signals in preparation for Thursday’s away game.

The Bainbridge High School Lady Cats softball team could be found hard at work on Tuesday afternoon in preparation for their game against Lowndes County on Thursday.

Coach Christopher Bryant said the team has worked extremely hard the past few weeks, considering all the uncertainty with COVID-19 and it has paid off.

“I’ve seen a lot of progress these past few weeks,” he said.

The team has four seniors, Lexie Delbrey, Keyleigh Brinson, Dia Brown and Abbigayle Hamilton, but Bryant said they also have a few new faces such as, Brenna Conley and Hayley Nix, who are ready to help them out.

While Delbrey will continue to pitch primarily, Bryant said there are four pitchers on varsity who can help Delbrey out when needed.

When it comes to the competition, Bryant is excited about the new classification, but to also continue to play against some old rivals.

“I expect it to be stiff competition against us all,” he said. “Central and Cairo have always been competitive, but especially against Bainbridge… I’m looking forward to some fun games between those two.”

In addition to those games, Bryant said he knows one of the schools in Albany has some nationally ranked players, but he thinks the team is ready to take them on.

The team has been specifically focusing on teamwork. Bryant knows the year the team went to state it was because of the teamwork put in and the bond between the players, and that is what he wants to see this year.

“We are taking it one day at a time,” he said. “We are praying it goes in our favor.”

Bryant is ready for the team to take on Lowndes at their away game tomorrow.

He said they have a few things to tweak, but he is ready to tee it up over there.

“I’m ready to play someone else, I’m tired of us beating up on ourselves,” he joked.

Hostage situation sends one to hospital

Pastor recounts how churches came together amidst pandemic

Committee plans for a new Walk to End Alzheimer’s