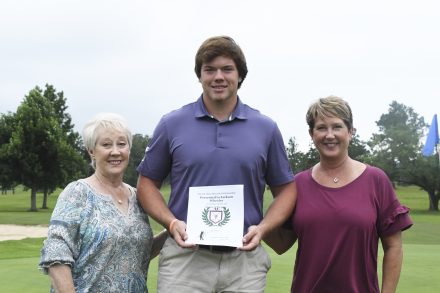 Sibley’s late wife, Patricia and his daughter, Beth Briggs, presented the Scholarship. Sibley was an avid golfer who spent many hours at the Country Club and often donated to the BHS Golf Team. He would give team members golf clubs or golf balls, who may not otherwise have any.

“He never coached, but he would go out there and give some tips,” Briggs said.

Wheeler was honored to receive the scholarship, he said.

Briggs and Patricia talked to the BHS golf coach and then collaborated to present Wheeler with the $500 scholarship.

“It means a lot to me,” Wheeler said. “I used to know Mr. Bill and he would talk to me every day, so it’s pretty cool to get this award.”

Briggs and Patricia said it would mean a lot to Sibley as well.

Patricia agreed saying her husband thought a great deal of Tom and Jackson as well and would be extremely proud.

Wheeler will now use his scholarship as he attends Georgia Southern University, where he has signed a scholarship to play football and pursue a degree in Exercise Science.