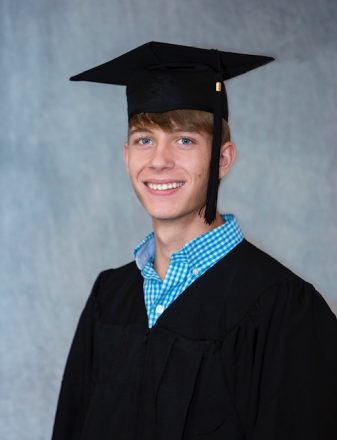 Recent Bainbridge High School graduate, Joseph Emmons just returned from a visit to Saint Leo University, where he has been offered the Dean’s Scholarship and been accepted into their Pre-Law Honors program.

Prior to accepting the offer from Saint Leo, Emmons was recruited by LaGrange soccer like his twin brother, Tom, however after an internship with the District Attorney’s office, Emmons decided to forfeit the opportunity and pursue law.

Emmons said his passion for law came through his internship with Joe Mulholland. Emmons was allowed to attend various trials and sit with other partners at the DA’s office, which really opened his eyes to what his future as a lawyer could be like.

“I found their pre-law program and sent in my application,” Emmons said.

“This program is so important,” Emmons said. “It saves you two years; it’s like a fast pass to law school.”

Emmons explained that he will stay at Saint Leo for three years. The first two years will be for pre-law and his final year will count toward his first year at law school.

While Emmons is excited to begin his future at Saint Leo University, he acknowledges it did come with some challenges.

Emmons tried out for Saint Leo’s soccer team after declining his offer to LaGrange and did not make the team.

“It was hard, but I’m definitely excited to forge my own path now,” Emmons said.

Emmons said he is thankful to his parents for their encouragement in pursuing his pre-law degree, but he is especially thankful to Mulholland.

“Joe Mulholland really helped me and took the time to make sure I was taking the best steps forward for my future,” Emmons acknowledged.

Emmons’ mother, Ann Marie, said she is very proud of her son and looks forward to seeing what he does in the future.