No serious injuries after car goes off road near Elberta Crate 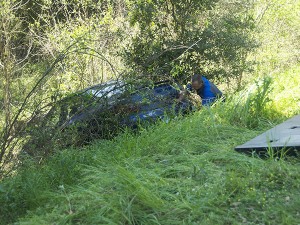 No serious injuries were reported in a two-car accident that caused a Hyundai Elentra to drive down the hill across from Elberta Crate Monday afternoon.

Shelia Marshall was driving a Ford Explorer west on Dothan Rd. towards the Shell Station when she struck the Elentra driven by Reina Gasper according to Georgia State Patrol Officer Meed Kelley.

Gasper was pulling out of the Elberta Crate parking lot and failed to yield to Marshall leading to the wreck according to Kelley. After she was hit she crossed over the road and drove down the hill into the ditch.

“All I seen was her going across there,” Angela Mahone, who witnessed the accident said. “I put my car in park and ran to her.”

Mahone said she slid down the hill to check on Gasper, who suffered no serious injuries in the accident.

“I was very surprised,” Mahone said about Gasper being uninjured. “When I got down there she was all shaken up.”

Gasper was able to climb the hill under her own power after being helped out of the car by Bainbridge Public Safety Officers.

Marshall stated that she was injured in the accident, but she was not transported to the hospital.

Gasper’s car, which was pulled from the ditch by a tow truck, suffered damage to the front end, but the air bags did not deploy.