Bearcats in the running for state playoffs 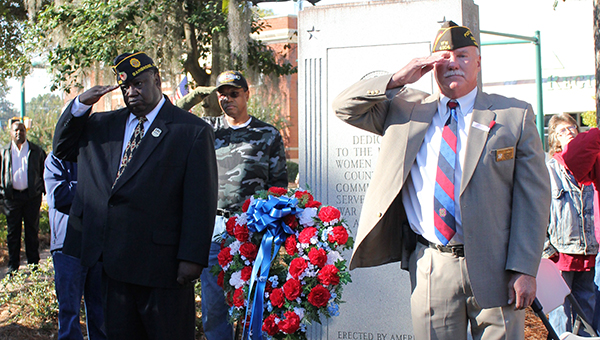 Despite the cool fall temperature, more than two hundred supporters came out to Willis Park Tuesday morning for Bainbridge’s Veterans Day ceremony.
“It’s easy to recognize our veterans and active duty service members who are very visible in their ongoing operations overseas,” said retired Lt. Col. Ronnie Betts, who was the keynote speaker, “however, the majority of our veterans that we honor no longer actively serve wearing a military uniform. They have gone on to become our teachers, our police officers, our firemen, neighbors. Whether they wear the uniform today or did decades ago, veterans represent an unwavering dedication and exemplify the highest deal of service to the nation.”
Betts also spoke about the origins of Veterans Day, which originated as “Armistice Day” on Nov. 11, 1919, the first anniversary of the end of World War I. Congress passed a resolution in 1926 for an annual observance, and Nov. 11 became a national holiday beginning in 1938.
“Today is a day of honor,” Betts said. “It’s also a day to honor. On this day of celebration, I thank everyone who has worn a U.S. Military uniform for their honorable service and for our freedom.”
The ceremony also included music from the Bainbridge High School Band, under the direction of Paschal Ward, and the colors were presented by Bainbridge High School Air Force Junior ROTC cadets led by U.S. Air Force retired Lt. Col. Dave Stewart.
Decatur County Commissioner and VFW member Oliver Sellers read the names of Decatur County veterans who have passed away since Veterans Day 2013.
VFW Post 4904 Commander Hill Yates and American Legion Post 502 Commander Lester Burke set a wreath on the monument erected in memory of deceased Decatur County veterans of all wars. The two stood and saluted while a lone trumpeter performed “Taps.”