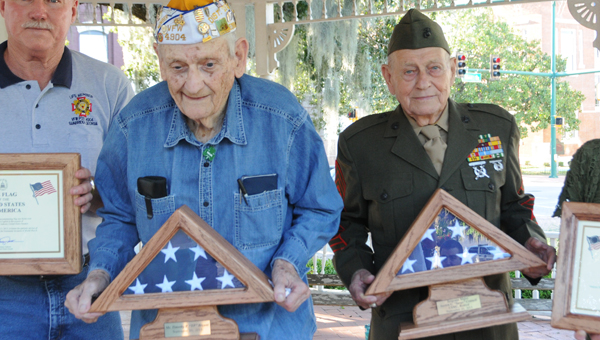 WWII veterans T.P. Bryant, left, and Sgt. Austin Connell stand with their folded flags that have flown over the U.S. Capitol building. The men were honored Friday at Bikefest.

Friday afternoon two WWII veterans were honored in front of Bikefest goers and to their surprise recognized for being heroes. Two men of Bainbridge from the greatest generation arrived Friday not knowing they would be given flags flown over the U.S. Capitol building and were saluted by friends and neighbors in Willis Park.
Bikefest promoters wanted to have a special service honoring veterans.
Col. Gary Breedlove spoke and presented T.P. Bryant and Sgt. Austin Connell with flags and plaques.
“These flags of the United States were flown over the U.S. Capitol at the request of Sen. Johnny Isakson, United States Senator,” Breedlove said, who wasn’t sure what the Bikefest event would do to honor others this year. But Breedlove then felt called to recognize people who he considers to be his heroes.
“This is the greatest generation and I have known these guys since I came to town,” Breedlove said. “These are my heroes, I’m getting choked up just thinking about it.”
But he wasn’t the only one choked up, holding in tears as he spoke about men who fought through awful, brutal wars.
Strangers to Connell and Bryant that were attending Bikefest came to the stage following the ceremony, after “Taps” was played and thanked the men for serving. The men who said they had seen the bloodiest of battles, Connell and Bryant, were visibly overwhelmed from the recognition.
“I am not one of these glory happy people. There was a job that had to be done. Someone had to do it and we did it,” Bryant said, who fought in the Normandy invasion. “I went around and made the two bloodiest invasions ever made on opposite sides of the world. I didn’t see a hero the whole time. There are no heroes. You have a job to do and you happen to be in that place and do it. What’s a hero,” he asked.
And Connell shared his same thought.
“It was a great honor today,” Connell said, beginning to cry. “But I really don’t feel like I did anything.”
Sgt. Connell fought in WWII, the Korean War and Vietnam War.